David Beckham wants Brad Pitt to play him, if a movie were made about his life. 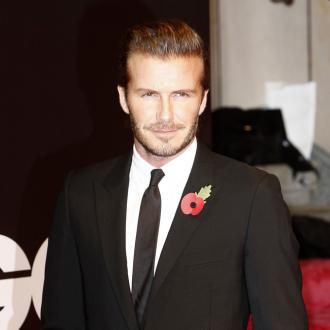 David Beckham wants Brad Pitt to portray him in a movie about his life.

The retired soccer star is a fan of the Hollywood hunk and thinks if a film were ever made about him, Brad, 49, would be a good choice for the starring role.

Speaking on Talksport Radio, David joked: ''I think Brad would be the obvious choice. I'd like Brad to be playing me - him or Leonardo Dicaprio, one of the two. Or Bradley Cooper. They're not bad looking guys.''

David, 38, finished playing soccer professionally in May, but says he's had plenty of opportunity to stay in shape since, as his children - Brooklyn, 14, Romeo, 12, Cruz, nine, and two-year-old Harper, with wife Victoria - keep him on his toes.

He added: ''I had four months where I literally didn't do one bit of any physical activity but then I gradually started to do it, I'm chasing four kids around.

''I think Victoria is waiting for me to get a couple of tires around my waist but right now it's not happening, thankfully.''

One activity David can focus on now he's retired is DIY, as he and Victoria are reportedly planning £5 million in renovations for their west London town house, which they recently purchased for £40 million. Improvements are said to include two rooms for Victoria's shoes and every bathroom to be fitted with a waterproof plasma TV.