Former soccer star David Beckham is to support his friend James Corden's bid to crack America by appearing on his new TV show. 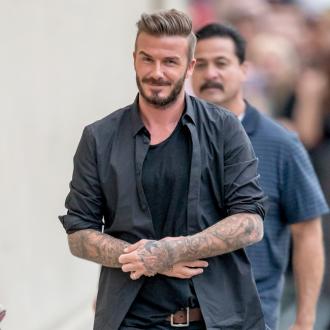 The 39-year-old former soccer star is a good friend of the TV presenter and has agreed to fly to Los Angeles to join the comedian on the 'Late Late Show'.

A show source said: ''David is one of the most ­famous men in the world so having him on his show in America is just brilliant for James.''

The duo will appear together in a surprise comedy sketch after David has been interviewed.

The insider said James is already looking forward to David's appearance, telling the Sunday People newspaper: ''He can't wait for the fun they will have. It promises to be one of the best moments on the Late Late Show yet.

''James knows that the pair of them will have a right old laugh.''

Meanwhile, James recently confessed he was on a ''quest'' to not vomit on his clothes during his 'The Late Late Show' debut.

Despite having the support of a wonderful team, James admits it was still a terrifying experience.

He recalled: ''You know so much that it's a team from everyone - your wonderful band, everyone backstage, these incredible technicians, you're absolutely in a team.

''So that's what I was thinking - we're all making this show together, and then just one night I found myself behind the curtain with all of these people who I thought were in it with me going, 'Hey, good luck man.'

''You look and they're gone and you're just on your own and all you can see is the spotlight from the back of the room on the curtain, just this circle, and you just go, 'Ah, this is going to open in a minute ... and I'm going to have to walk out there and look remotely like I know anything about anything.' And then it's just a quest to not throw up on your own clothes. That's the truth.''