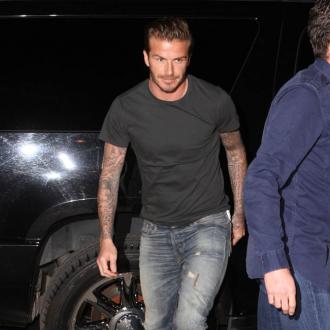 David Beckham is starring in a new TV show for kids.

The ex-soccer star is set to pass his sporting skills on to the next generation by fronting a new Saturday morning programme aimed at encouraging Britain's youngsters to get into sport.

He will teach a series of masterclasses alongside Olympic athlete Jessica Ennis-Hill as part of new Sky Sports show 'Game Changers', which debuts on August 17.

David told The Sun newspaper: ''It's an ambition of mine to inspire more young people to take part in sport. I'm excited to be one of a great group of athletes contributing to Game Changers and working with Sky, who have the passion to make it happen.''

The children's programme will be hosted by sprint star Darren Campbell and presenter Di Dougherty, with Paralympic wheelchair rugby captain Steve Brown acting as a reporter.

Surprise sporting guests will also be roped in to help the kids as well as being interviewed in front of a live studio audience.

David, 38 - who has sons Brooklyn, 14, Romeo, 10, Cruz, eight, and two-year-old daughter Harper with his wife Victoria - recently expressed his desire to move into coaching now he has retired from playing the sport professionally.

He said: ''I'd love to coach my daughter. That's the only management side I would take up because I wouldn't want anyone else telling her what to do!''

'Game Changers' will be available on Sky Sports, Sky 2 and Pick TV at 9am every Saturday.