David Beckham to have pie and mash shipped to France

David Beckham is planning to have his favourite meal of pie and mashed potato shipped out to France from his regular shop in Essex during his training with Paris Saint-Germain. 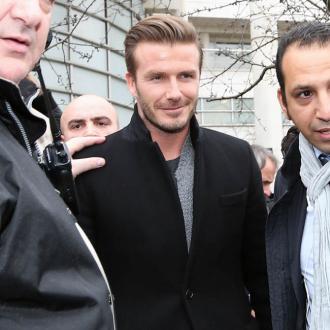 David Beckham is having pie and mashed potato shipped out to France.

The 37-year-old soccer star has signed a five-month contract with Paris Saint-Germain but won't be missing out on his favourite hearty meal as Tony Lane - whose shop in Waltham Abbey, Essex, East England, is a regular haunt of the sportsman when he is in the UK - has promised to package out the food to his new home, repeating the habit he established when he lived in Spain and played for Real Madrid for four years from 2003.

''We've already been told to send our pies over to France - and it's not unusual. We did the same when he was at Madrid and even deliver them when he stays at the Savoy [hotel] in London.

''And if he wants me to come and cook for him there, my door is open.''

David - who has 19-month-old daughter Harper and sons Brooklyn, 13, Romeo, 10, and seven-year-old Cruz with wife Victoria - always orders the same meal consisting of double pie, double mash, parsley liquor and jellied eels on the side.

Tony believes his traditional food is what keeps David ''fit'' and looking youthful.

He added: ''My pie and mash has made David the fit man he is. He'd be showing his age a lot more if he hadn't been eating our recipe regularly.

''Once he's settled in Paris and knows where he is, he'll be back in my shop.''