David Beckham is set to launch a range of designer long johns when he debuts his underwear collection in February next year. 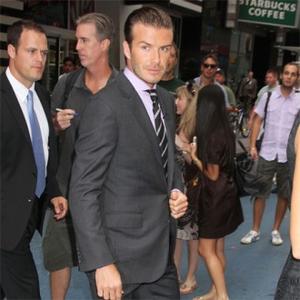 David Beckham will launch a range of designer long johns.

The soccer heartthrob - who signed a deal to create his own collection of underwear earlier this year after starring in an advertising campaign for Emporio Armani men's briefs - wants to give the old fashioned items a makeover when he launches the range in February 2012.

He said: "I sometimes wear them to go to sleep. They're very cool."

David - who is currently playing for Los Angeles Galaxy - is reportedly being backed in his plans by his manager Simon Fuller and fashion designer Stella Mccartney's husband Alasdhair Willis.

He also wants wife Victoria - who launched her debut collection in 2008 and is now a well-respected member of The Fashion world - to be heavily involved in the project.

David added: "The underwear is totally my designs, things that I like to wear."

A source said: "David is 35 and knows he won't be playing soccer forever. But he's an icon for men all over the world and he wears pants like no one can - so it makes sense for him to launch his own."