David Beckham displayed his devotion to his daughter Harper by spending Good Friday helping her to make dresses and accessories for her dolls.

The retired former Manchester United, Real Madrid and L.A. Galaxy player, 40, was snapped by wife Victoria as he sat on the floor stitching clothes for Harper’s toys. The picture shows Beckham with a look of serious concentration on his face as he follows the instructions, with a pink piece of material and needle and thread in hand.

The ex-Spice Girl and fashion entrepreneur shared the candid photo with her 9 million followers on Instagram, captioning it: “Harper has daddy stitching her dollies dresses!!! We love you @davidbeckham #lovingdaddy #proudmummy #familyfun x vb (sic)”.

A recent post by David himself saw Harper brushing her teeth while wearing a Man Utd kit, emblazoned with her father’s iconic squad number 7 on the back - which also happens to be her middle name.

Four year old Harper seems to share both her father and brothers’ love for football and her mother’s love of fashion. Like all great parents, they’ll let her choose what she wants to do, but David recently revealed that, deep down, Victoria would like her only daughter to share her enthusiasms. 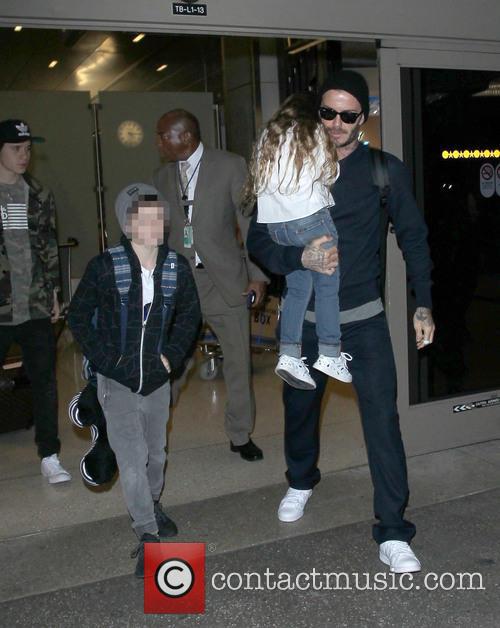 The Beckham family arriving at LAX in March 2016

“I think Victoria's had 16 years of sitting on cold Sunday mornings on the sidelines, watching the boys. She'd like to sit indoors and watch Harper either play tennis or ballet or tap."

Earlier this year, he told Entertainment Tonight about how he can’t help spoiling his daughter, saying it was much harder for him to be a strict parent when compared to his three sons (Brooklyn, 17, Romeo, 13, and Cruz, 11).

“I have no power with that little girl – no power whatsoever! I love all my children, of course, equally, but I'm definitely stricter with the boys than I am Harper, which gets me in trouble with my wife of course.”