David Beckham admits suffering from obsessive compulsive disorder (OCD) is ''tiring'' but he can't relax if his surroundings are not ''perfect''. 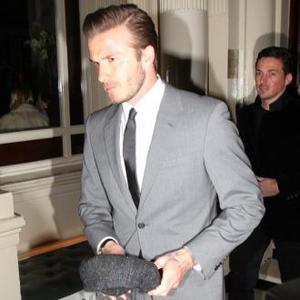 The soccer star says he has ''accepted'' his condition - which sees sufferers compelled to undertake particular rituals and repetitive routines to stave off anxiety - but needs everything to be ''perfect'' before he can carry on with his day.

He said: ''It's not something I worry about. I've accepted it. I'm just very obsessive with certain things. Everything has to be in order. That's the way it is.

''Walk into a hotel room and before I can get settled I have to unpack, everything has to be perfect; the magazines the right way, the drawers in the right way, or whatever. It is, it's tiring. But it's more tiring if it's not done the right way.''

Although he admits to a ''love'' of red wine, David - who has children Brooklyn, 13, Romeo, nine, Cruz, seven, and 12-month-old Harper with wife Victoria - insists he doesn't get drunk very often.

He told Esquire: ''I let my hair down with my family, the children, my close friends.

''I like - Love Actually - a glass of good red wine. When was I last drunk? At the weekend. I had the day off so I had a couple of glasses of red wine. But I'm not a big drinker. I don't do things excessively.''