David Beckham looks virtually unrecognisable in his role as a soldier to King Vortigern in Guy Ritchie's 'King Arthur: Legend of the Sword'. His appearance was teased in a new clip for the film, and he looks pretty horrifying to say the least. 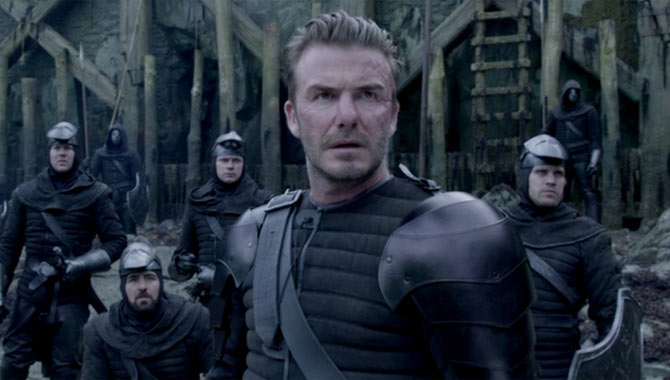 The soccer star plays a rather snide and unpleasant character named Trigger in the movie, who orders Arthur (played by Charlie Hunnam) to pull Excalibur from the stone; a key moment in the story. As of yet, it's unclear whether or not he has any further scenes in the forthcoming film.

What is clear, however, is that you won't forget his face in a hurry. His good looks have melted away with the addition of a scar on the side of his face and a prosthetic nose, accompanied by a slightly questionable strong cockney accent.

Despite what you may have thought, this isn't actually the 42-year-old's film debut. Keen-eyed fans will note that he made a cameo as the projectionist in Guy Ritchie's 2015 film 'The Man from U.N.C.L.E.'; a very 'blink and you'll miss it' part. This role is a little more obvious, but likely still brief. Though it will leave us searching for him in Guy's next movie.

Also starring in the film are Jude Law as Vortigern, Djimon Hounsou as Bedivere and Eric Bana as Arthur's usurped father Uther Pendragon. The screenplay, meanwhile, has been co-written by Guy, Lionel Wigram and Joby Harold ('Awake').

It follows the story of Arthur, who grows up in Londonium as a peasant before uncovering the truth about the rule of the kingdom, his father's fate and his destiny as King. He must make a choice between leading a rebellion against Vortigern, or turning his back on his birthright forever.