As a father of three sons, ex-professional football icon David Beckham must have been pretty hopeful that at least one of his boys would follow in his footsteps and play the game for a living too.

However, the English star has admitted that he’s a bit heartbroken that neither of Brooklyn, Romeo and Cruz are interested in playing football any more – though he’s holding out hope over his daughter Harper, who apparently loves the game.

Speaking on this week’s edition of ‘The Graham Norton Show’ in his home country, set to be broadcast this Friday (May 11th), Beckham said: “Harper is playing every Sunday and loves it. The boys don’t play and it’s heartbreaking.”

Asked about the prospect of any of his kids playing professionally, the 43 year old replied: “They have a talent but it’s down to Harper now. I get very enthusiastic when watching her.” 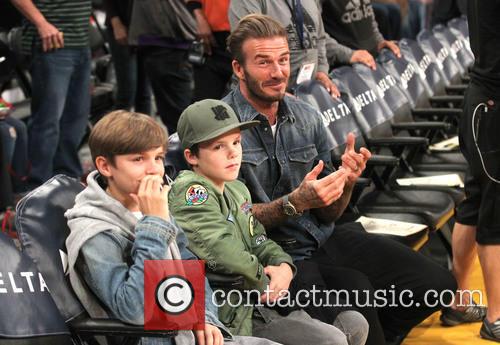 David Beckham with Romeo and Cruz

The six year old is the youngest of the Beckham brood, with adult son Brooklyn (19) studying photography at university in New York and his younger siblings Romeo (15) and Cruz (13) apparently pursuing artistic passions too.

More: David Beckham denies that his smooth head is down to botox

However, the former Manchester United and Real Madrid star confessed that, watching her, he found it a bit difficult to resolve his professional responsibilities with his personal emotions.

“The other day a boy took her down,” Beckham recalled, “and I had to think how to react with all the other parents watching me. Do I act like a UNICEF Ambassador or do I act like Harper’s daddy? In the end, I let it go!”

Beckham is widely rumoured to be re-locating to the US soon, having fulfilled a long-standing ambition by founding an MLS franchise team in Miami. However, he says that: “I’ll spend a lot of time there, but the kids and Victoria are here.”