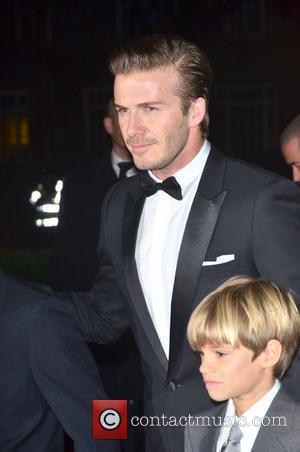 David Beckham and his wife Victoria are reportedly furious after a Christmas card they'd originally sent to a few select friends and journalists leaked online. The picture reportedly shows the Beckham kids all topless, and was first made aware to the public after Vogue Magazine senior fashion news editor Jane Keltner De Valle posted it on Twitter alongside the caption "Cutest thing about victoriabeckham's xmas card? Photo cred on back that reads 'Picture by Daddy." Others who picked up the photo included Australian gossip site Popsugar while the editor of Glamour, Jo Elvin also posted the photo.
It became apparent that the snap wasn't for public consumption however, reports the UK's Daily Mail, when Elvin subsequently took it down from her Twitter account and tweeted "I should point out, the Christmas card from the Beckhams is Not for publication. It was private. My bad. Sorry, got swept up in adorableness."
In other bad news for the Beckhams, David's expected move to football team Paris Saint-Germain isn't being greeted wholeheartedly by France, with one of the country's Presidential candidates next year Eva Joly thundering, "It's not a game, it's business. At his age and with the state of his knees, he's going to be selling T-shirts." The footballer has largely been at the pinnacle of the sport following his rise into the Manchester United first team and then spending time at Spanish giants Real Madrid; however he turns 37 next year and, having spent four years with Los Angeles Galaxy, is viewed by many to be long past his best.