David Beckham and his sons Romeo and Cruz were covered in gold slime as he was honoured with the Legend Award at the first ever Nickelodeon Kids' Choice Sports Awards. 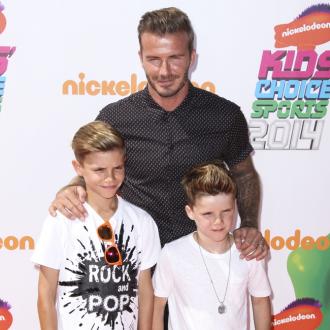 David Beckham and his sons were showered in gold slime at the first ever Nickelodeon Kids' Choice Sport Awards last night (17.07.14).

The retired soccer star was honoured with the Legend Award at the ceremony, which took place in Los Angeles, but following a heartfelt speech onstage David - joined by sons Romeo, 11, and nine-year-old Cruz - couldn't escape a signature gunking at the hands of the youth-oriented TV channel.

A torrent of golden slime rained down on the trio and while Nickelodeon is known for sliming celebrity guests with green ooze at its awards shows, it seems the special gold-coloured gunge was an ode to David's 'Golden Balls' nickname.

The 39-year-old hunk took the good-natured ribbing in his stride, wiping away the slime from his face and smiling as he left the stage.

In his speech, David said: ''When I was young my dream was to be a professional soccer player.''

The awards bash was the perfect mix of sports and celebrity as stars including DWAYNE 'THE ROCK' JOHNSON, Will Arnett and Nick Cannon helped celebrate America's top sporting heroes.