David Beckham may consider getting an intimate Tattoo on his private parts to add to the 30 he already has. 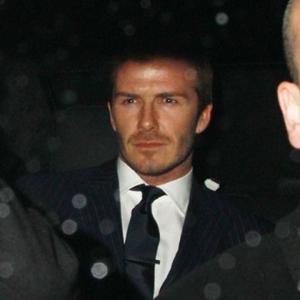 David Beckham would consider getting a Tattoo on his penis.

The soccer star estimated he has around "30 or 31" pieces of body art and plans to have further inkings in the future - and wouldn't rule out having one in an intimate area.

TV talk show host Craig Ferguson asked: "Did you get any on your business?"

To which David replied: "Not yet. I was thinking about it [just then]."

What Craig jokingly suggested they could "go together" to get tattoos on their penises, the British hunk agreed, saying "sounds great" but admitted he would need to think of a design first.

If David, 36, does go ahead with the intimate inking, his wife Victoria - who is pregnant with their fourth child - is not likely to be pleased.

David also said he'd let his boys - Brooklyn, 12, Romeo, eight, and six-year-old Cruz - get tattoos when they are old enough -but not his daughter, due to be born in six weeks.

He added: "I'm not sure I would let her get tattoos but the boys I couldn't really argue with. I love mine personally, but I'm not sure they're going to look great when I'm 75."

The sportsman also told how it was "amazing" to meet US president Barack Obama at a dinner in London during his visit last week, and that he was shocked when at the same event, Queen Elizabeth asked him about his personal life.

David - who was a guest at Prince William's recent nuptials to the Duchess of Cambridge - said: "Funnily enough she knew I was having a baby in six weeks. It shocked me that she knew. I love the queen."