Victoria and David Beckham are ''so proud'' of their son Romeo, 12, for running the London Mini Marathon and raising £6000 for UNAIDS and 7 Fund. 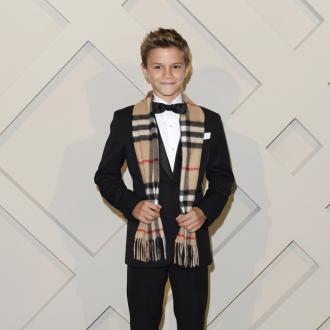 Victoria and David Beckham are ''so proud'' of their son for running the London Marathon.

The 41-year-old fashion designer and the 39-year-old soccer star came out to support Romeo, 12, as he took part in the children's race, earning £6000 for charity.

Taking to Instagram to share a snap of Romeo after the run, she said: ''Well done Romeo!! We r all so proud!! Running @londonmarathon for UNAIDS and 7 Fund x vb (sic)''

The couple's other sons, Brooklyn, 16 and 10-year-old Cruz, were also there to support their brother, with the whole family dressing in custom-made 'Team Romeo' t-shirts.

Captioning a photograph of him and Romeo, Brooklyn added: ''Congratulations Romeo for raising £6,000 for UNAIDS and 7 Fund (sic)''

It's no surprise that Romeo entered the marathon as David previously revealed the 12-year-old model beat him in a running race.

He said: ''He's one of those annoying runners who always want to be one step in front of you. We ran three and a half miles and the third mile was the quickest of all of them. I was breathing hard.

''He was a step ahead of me the whole way. My drive must have rubbed off on him. I was very proud of him.''