David Arquette has been treating his 'Dancing With The Stars' partner Kym Johnson to ''ice cream and massages''. 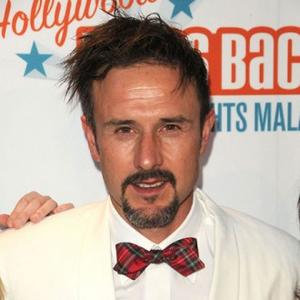 David Arquette has been treating his 'Dancing With The Stars' partner to "ice cream and massages".

The 'Scream 4' actor - who split from estranged wife Courteney Cox last October and is now dating news reporter Christina McLarty - likes to "lift the spirits" of his professional partner Kym Johnson behind the scenes of the show.

He said: "I like treats and doing things to lift people's spirits. We've had ice cream and massages, little parties.

Kym added: "He took us on a little field trip - we went to Universal [Studios, Hollywood], we went to your house for barbecue, he cooked ribs for us."

Meanwhile, David - who has a seven-year-old daughter, Coco, with Courteney - is also producing a new NBC show alongside his estranged wife, which documents a tale "similar" to the former couple's own relationship.

He told 'Access Hollywood': "It's called 'Ten Years.' Courtney and I are producing it with our company. It's based on the writer's experience and our experience of being separated, and what that's like. It's a lot of communication.

"It's similar in that this writer was separated and had a child, and had to sort of work it out with his ex, and figure out how they could maintain a relationship and be really great parents."