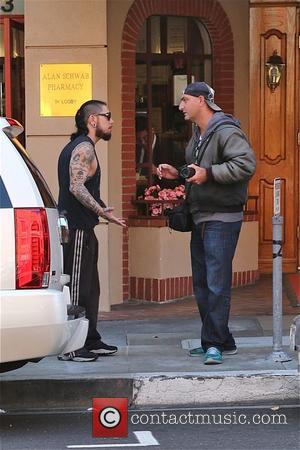 Picture: Dave Navarron - Dave Navarro becomes involved in a discussion with a photographer while out and about in Los Angeles - Los Angeles, California, United...

Rocker Dave Navarro has reunited with his model/actress ex-wife Carmen Electra after taking her to the Revolver Golden Gods Awards on Wednesday night (23Apr14) - as his date.

The former Baywatch beauty was reportedly dating clothing mogul Tal Cooperman just last month (Mar14), but it appears she has since moved on and is back with Jane's Addiction star Navarro.

The couple seemed to be very much together, posing for the cameras on the red carpet at the Los Angeles event, and they even took a raunchy 'selfie' of themselves touching tongues.

Navarro shared the photo with his Twitter.com followers and captioned the snap, "May get lucky with this one tonight! #Goldengods @carmenelectra".

The pair divorced in 2007 after over three years of marriage.