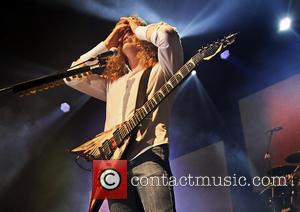 Rocker Dave Mustaine has flown to San Diego, California in a bid to help volunteers find his missing mother-in-law.

Sally Estabrook, who suffers from Alzheimer's disease, wandered off from a campground in the county on Saturday (04Oct14) and has not been seen since.

Local authorities expanded their search for the 75 year old on Tuesday (07Oct14) and now the Megadeth frontman has flown in from Tennessee to help a group of 50-plus volunteers as they attempt to cover his missing mother-in-law's tracks.

Upon his arrival, the heavy rocker tweeted his thanks to the American Red Cross and to the local shops that have been feeding the search party.

He told local news network Kfmb, "As you can imagine, we're pretty distraught. My wife, she’s very, very upset. I think with her having Alzheimer's, it complicates it so much. I’m just asking anybody who saw anything, just please call 911."