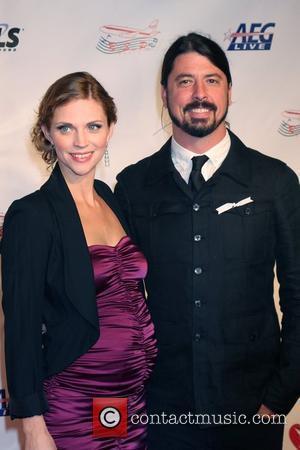 Rocker Dave Grohl landed his dream job backing Sir Paul McCartney at the Grammy Awards on Sunday (08Feb09) - because the former beatle's regular drummer was on tour with Eric Clapton.
The former Nirvana percussionist and current Foo Fighters frontman was thrilled to get the call inviting him to join his hero onstage, but it had little to do with his own talents.
MCCartney explains, "Dave played with us in Liverpool, where I did a concert there last year, and he played alongside my drummer Abe (Laboriel), but Abe wasn't available for the Grammys; he was in Japan with Mr. Clapton. So we rang Dave up and said, 'Can you do it?'"
Grohl played drums for MCCartney during two songs at a show in Liverpool last June (08), and accompanied the Beatle on Wings hit Band On The Run, and, on Sunday night, he played drums on I Saw Her Standing There, but he was upset he never got the chance to play a full concert behind MCCartney.
Reports suggest Grohl tried to convince MCCartney to play a secret warm-up show at the House of Blues in Los Angeles on Saturday night (07Feb09).