Dave Grohl Performed From A Giant Throne During The Foo Fighters' First Gig Since Pulling Out Of A Number Of Shows Due To The Frontman's Broken Leg. 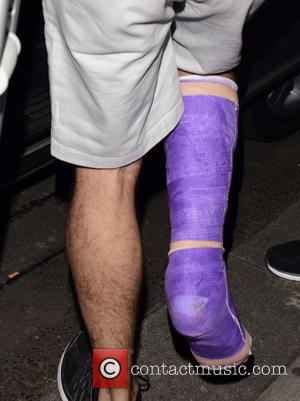 Picture: Dave Grohl and David Grohl - Dave Grohl leaving C London restaurant on his crutches with a purple cast on his leg. at w1 -...

The rock band played a 20th anniversary concert at the Robert F. Kennedy Memorial Stadium in Washington, D.C. on Saturday (04July15), and Grohl spent the show seated in a giant throne, surrounded by guitars, lights and amps.

It was the group's first outing since cancelling a number of European dates and a headline slot at Britain's Glastonbury Festival after Grohl broke his leg in a stage fall at a show in Sweden in June (15).

During the Independence Day concert, the band played a string of hits including Everlong, Monkey Wrench and Best of You, while Grohl's mother also joined the rockers onstage for a rendition of For All The Cows.

The show featured support from acts including Joan Jett and the Blackhearts and LL Cool J.