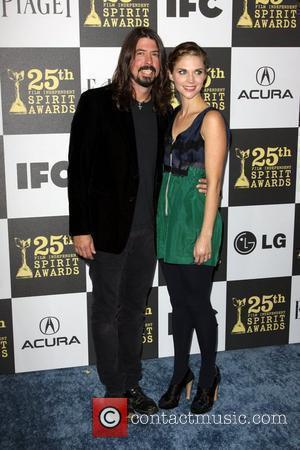 Dave Grohl wants to record the next Foo Fighters album in his garage.
The rocker recently revealed he had cancelled the band's planned hiatus after landing the opportunity to work with former Nirvana producer Butch Vig.
The Foo Fighters are now preparing to start work on a new "heavier than ever" album - and Grohl wants to take the recording process back to basics.
He says, "The way you make an album dictates the way it sounds. One of my favourite (Foo Fighters) records was our third one, which we made in my basement in Virginia.
"We had sleeping bags that we nailed on the wall for soundproofing. The general vibe on that record is really comfortable. I'd go upstairs and make chili and come downstairs and do a vocal on a couch. It's the same idea. To me it's about switching up the process; we've been using Pro Tools and all that computer stuff the last couple of records. We're putting that stuff in the closet and getting our old tape machines out so that we can just do it like we used to do it."