Injured Rocker Dave Grohl Was Reportedly Treated To Lunch With Prince Harry After The British Royal Heard The Foo Fighters Frontman Had Broken His Leg. 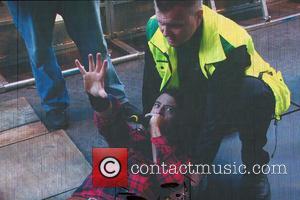 The singer suffered a number of fractures when he fell from the stage during a concert in Sweden last week (ends14Jun15) and he flew to London to undergo an operation on Monday (15Jun15).

Sources say that Prince Harry, who befriended Grohl two years ago after attending one of his shows, invited the star out for lunch as he recovered.

An insider tells Britain's The Sun newspaper, "Harry was one of the first people Dave heard from after his bad stage fall and said that when he was back on his feet he'd like to treat him to lunch. Harry has had a bad knee injury in the past - so him and Dave had plenty to chat about."