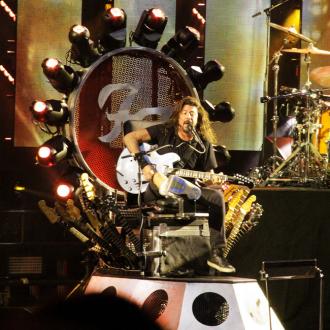 The Foo Fighters frontman broke his limb after falling off stage last month - subsequently cancelling a headline appearance at Glastonbury and other tour dates, although he has now performed on a few occasions - and he has created his own ''rehab therapy'' to get back to his best.

He said: ''Leg is doing fine. It's a slow process, but every day it seems to feel a bit better.

''It's funny, ever since I started playing the drums my right calf muscle has been twice the size of my left from stomping the hell out of my kick drum pedal but now it looks like a sad little chicken wing.

''I've been doing a little bit of my own rehab therapy lately, which is air drumming along to Zeppelin three times a day.''

Though Dave has had more time off since breaking his leg, he hasn't been writing any music as he thinks it would be a ''frustrated, depressing mess''.

Asked how he has been killing time while recuperating, he told Q magazine: ''Crawling around on my butt packing suitcases and trying to get in and out of baths and doing boring rehab exercises every few hours.

''If I were to write an album now it would be a frustrated, depressing mess. Keep that guitar away from me.''