Dave Grohl Invited A Former Classmate Who Beat Him In A High School Battle Of The Bands Competition On-stage During A Foo Fighters Gig. 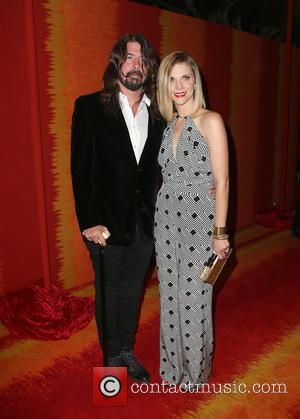 Editors of Billboard.com report that Dave invited musician Chet Lott on-stage during the band's show in Memphis, Tennessee on Wednesday (07Oct15). Chet defeated the rocker in their ninth-grade battle of the bands competition, Dave told the crowd.

They reunited to cover David Bowie's Under Pressure, and Chet told Dave after the performance, "I may have won the battle, but you won the war."

The band is becoming as famous as Taylor Swift for inviting guests to perform with them during their world tour, with members of Pearl Jam and Blind Melon, Led Zeppelin's John Paul Jones and Queen's Roger Taylor, and Red Hot Chili Peppers' Chad Smith joining the rockers.

The rockers also invited Dave's surgeon, Dr. Lew C. Schon, up on-stage during their gig in Boston, Massachusetts. The pair performed the White Stripes' Seven Nation Army back in July (15).

The tour was derailed over the summer (15) after Dave fell off stage at a gig in Sweden and broke his leg, but they later resumed the trek using a specially-made throne for the star to sit in while on stage.