Dave Grohl Has Hinted The Foo Fighters Are To Make A Return To Glastonbury Festival In 2016 To Make Up For Cancelling Their Headline Set At This Year's (15) Event Due To The Frontman's Broken Leg. 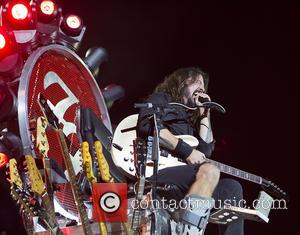 The rocker hurt himself during a show in Sweden in June (15), and the band had to pull out of a pair of gigs at London's Wembley Stadium as well as their highly-anticipated performance at the fabled British music event.

The band returned to the U.K. over the weekend (05-06Sep15) to play two make-up shows at the Milton Keynes Bowl, and during the final gig, Grohl apologised for the previous cancellations and hinted the band is considering a return to Glastonbury next year (16).

He told the audience, "I'm sorry for the delay... I was a little upset about Glastonbury. Maybe next time..."

Grohl also suggested it could be a while until they return to the U.K. and joked about his broken leg, adding, "I feel like we need to take a little bit of a break after this... No pun intended motherf**kers."

At the Milton Keynes shows, the band handed out specially-made key rings to fans, designed in the shape of the throne Grohl has been using on stage while he is unable to stand, to say sorry for cancelling the previous concerts.