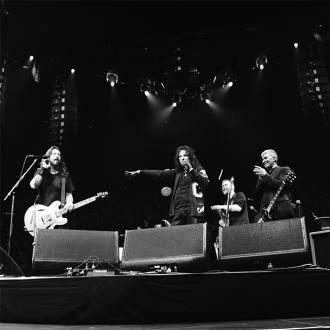 Titled 'Hollywood Vampires', the LP will pay tribute to the social group that the 'Poison' singer used to drink with in the 70s, which included John Lennon, Keith Moon, Harry Nilsson and Ringo Starr, and will include covers of songs made famous by the friends that the group has ''lost to drugs and alcohol over the years''.

Cooper said: ''The album's done. It's mixed, ready to go and I'm very, very happy with it. I'm really happy with all the stuff on it. McCartney's on it. (Ringo Starr's drummer son) Zak Starkey's on it. Dave Grohl is on it, (AC/DC frontman) Brian Johnson, and in places where you wouldn't expect them to be, that's the cool thing.''

While the 67-year-old rocker wouldn't reveal which covers are going to appear on the album, he hinted at songs originally performed by artists like Jim Morrison and Lennon, and joked that ''the performers have to be dead''.

Speaking to Billboard, Cooper said: ''I can't really say (what covers will be on the album) right now, but if you think of it, who were the Hollywood Vampires? John Lennon was there. Jim Morrison was an early Vampire. We had Jimi Hendrix, Keith Moon of course, Harry Nilsson, Marc Bolan. Those guys were all Vampires. The performers have to be dead. Or mentally dead. Or should be dead.''

The Hollywood Vampires super-group are due to play the Rock in Rio festival in September.