Eccentric New Yorker Darwin Deez comes from that uber trendy Brooklyn lo-fi set that has been seeping into our unconscious for the last year or so. Look at the hippy curls, the trendy indie moustache and his love of quirky dance moves and you'll immediately get an idea of what to expect from his music.) 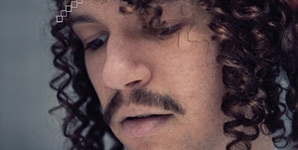 Although his self-titled debut could initially be mistaken for the sort of electronica we'd expect from the Brooklyn dweller, the record actually has a distinct lack of true electronica, barring the drum machine. Instead it is a mix of skilful, strangely clipped guitar riffs and that drum machine covered by Darwin Deez' New York drawl. His vocals range from upbeat and playful to a more whimsical tone, often reflecting his lyrics, and it's a good formula.

The album kicks off with the upbeat indie pop gem, Constellations. Repetition and an infectious melody immediately makes you realise this guy knows exactly how to structure the perfect pop tune. Another fine example of this is the stand out track and lead single, Radar Detector. Its playful melody, killer hook and falsetto vocals make this a real hit and it's already gracing the radio waves for good reason.

Darwin Deez seems to have found the perfect formula with these songs, however he doesn't seem content with that and instead of producing a handful of fillers, he changes his style to keep the album fresh.)

Darwin Deez is said to be a spiritual chap and a Baba lover and this album reflects that in a way. It's not over-produced, in fact, some tracks almost sound like bedroom demos but that's a compliment. It fits the whole feel of the album which oozes honesty and innocence, almost organic. It is yet further testament to his talent in the indie pop arena. At just over 30 minutes in length, it is a compact, perfectly formed and infectious summer record.