A Thankful Village is a British village where every soldier returned alive from World War I. The term, coined by the writer Arthur Mee in the 1930s, now unites a collection of songs by Darren Hayman, who set out to write a piece of music about each of the 54 Thankful Villages. 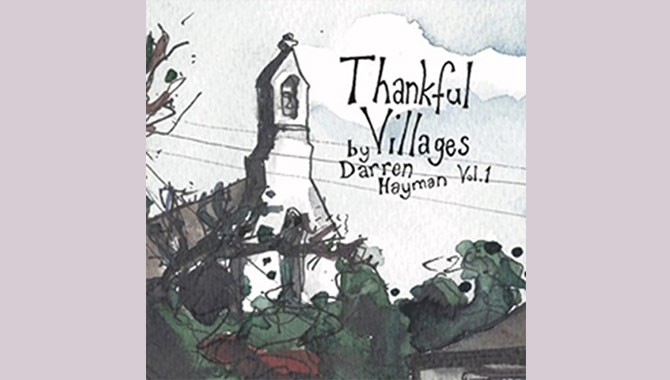 This is the first of three volumes and contains the songs Hayman wrote about the first 18 villages he visited. As the album progresses, it becomes clear that the focus of the tracks isn't simply on stories of the Great War. The Thankful Villages become a vehicle for Hayman to comment on the history of British village life and to tap into stories of families and communities that would otherwise remain untold.

'St Michael South Elmham', for example, is set around a story told by village local Dorothy Bloomfield, who tells of how her father was posted out to Greece to work with the mules that would carry ammunition to the frontline in World War I. While Dorothy's story begins with her father's role in the war and his eventual return home after contracting malaria, it evolves into a tale of family history and village life. We hear of her father's life after the war; how he would ride his bicycle around the village; how he sang traditional folk songs on Saturday nights; and how his horses would always return at the sound of his whistle.

Over the course of Dorothy's narration, Hayman gradually introduces organs, tambourines and plucked guitars. The traditional instruments work as a fitting accompaniment to the tales of British village life.

The instrumentation throughout the album furthers the sense of small, close-knit communities and traditional ways of life. Hayman's use of wooden instruments, field recordings, church organs and local congregations evoke a time before the internet, before instant communication and before technology pervaded life so thoroughly, conjuring up images of church processions, summer fetes and village greens.

But there's more to the album than nostalgia. Hayman tells of British village life not through rose-tinted glasses, but through understanding real people with real stories and experiences.

These stories are communicated in various forms. Many of the tracks are instrumental, some are based around interviews with locals, and others take a more conventional format, with Hayman on vocals and guitar. 'Stoke Hammond', for example, features pastoral lyricism and pared-back instrumentation, bringing to mind the material on Hayman's 2015 release, Florence.