Black Music, the debut album from Dark Horses, is the sort of album that will make people glad that CDs and records still exist. The notion of taking a disc out of its case or removing a record from the sleeve and then placing it in a hi-fi or record player would only add to the pleasure obtained upon hearing the opening track Rose. 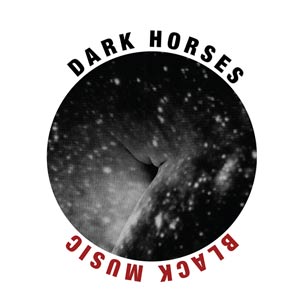 When I say pleasure, I mean a generous slice of darker than two in the morning gloom. The first track on the album is slow burning opening track with the haunting voice of lead vocalist Lisa Elle.

The first four tracks, Rose, Radio, Alone and boxing day are great. The amount of textures that the ears pick is enough to make a Justin Bieber fan go into cardiac arrest. One particular highlight is the lo-fi bass pinning everything down as everything weaves in and out of one another. But one issue that could be argued is that the vibe of the album is taking precedence of the music. Richard Fearless, of Death in Vegas fame, oversaw the production of Black Music and his track record has left a mark on the sound of this album.

One thing to be noticed is the length of the album. There are not many debut albums from bands these days that weigh in at 14 tracks. The problem some bands have had over the years is that once they go over the traditional album of 12 songs they run the risk of being just that one track too long which can totally alter the feel of the album. Because of the album's downbeat vibe from start to finish it has that slight feeling of being that one song too long. Black Music also features a cover of Talking Heads' Road to Nowhere.

If upon discovering this band for the first time, radio single, Radio, is probably the most accessible on the album. Many of the tracks on Black Music are a bit too slow and too downbeat for the mainstream stations. But Radio is a good calling card for the band to have to allow people the chance to hear what the band is all about.

One particular problem for a band like Dark Horses is that right from the off, they are already treading a fine line with regards to where they go next. The lo-fi, reverb, female fronted band has already been done well enough by bands and solo singers who have come before. As other reviews of this album have pointed out, the sound is akin to Mazzy Star, except Mazzy Star did it better. That's not to say Black Music is not a bad album. It's just that it could have been better. All in all, a decent introduction to the group but the wait starts now to see if the band's efforts can be stepped up.