By Dom Gourlay in Music Reviews on 04 January 2011

Dark Dark Dark might be a new name on the block as far as UK audiences are concerned, but the Minneapolis collective have actually been honing their craft for quite some time. It was back in 2006 that founder members Nona Marie Invie and Marshall LaCount conceived the idea of a lo-fi, folk-inspired, chamber pop ensemble, and having enlisted the talents of several main players from within their local music scene, the reality that became known as Dark Dark Dark was borne. 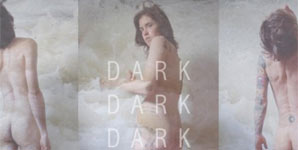 Dark Dark Dark is set to release a new EP on March 8th 2010 through Supply & Demand. The Bright Bright Bright EP features six new songs which were recorded with Tom Herbes (WHY?, Low and Fog). The sextet hail from different areas of the US and have recently supported Why? on their Autumn tour. Dark Dark Dark are currently recording their second album which is due for release later this year.

Wild Goose Chase is a cover of the Elephant Micah song and it was performed at Le Poisson Rouge in July last year.

You can catch Dark Dark Dark at this year's SxSW.