Country Star Darius Rucker Honoured The Victims Of The Recent Church Shooting In His Native Charleston, South Carolina By Dedicating A Song To Them At A Concert On Wednesday (26aug15). 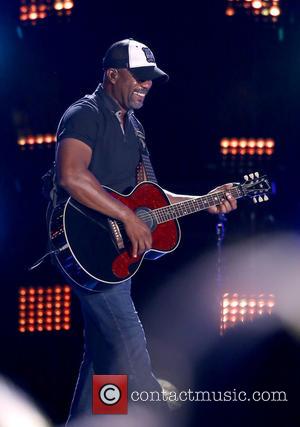 Nine people were gunned down outside an historic black church by white supremacist Dylann Roof in June (15) and the tragedy sent shockwaves throughout America and beyond, prompting stars including Chris Pratt, Patricia Arquette, Mandy Moore, Kerry Washington, John Legend, Beyonce, Jay Z and Tyler Perry to offer up prayers to the families of those killed.

The Hootie & the Blowfish frontman has now added his tribute to the victims by singing a rendition of church hymn Amazing Grace during a taping of CMT's Instant Jam series on Wednesday (26Aug15).

During the concert, he said, "We went through a lot crap recently. The tragedy broke my heart.

"The greatest feeling I've had in a long time is when that played out and our city didn't divide. We said, 'This is us'. We said to that guy that lives in a time that doesn't exist anymore, 'You wanted to mess with our city and instead you brought us together'."

He continued, "We realised how much we love each other that someone who is not like me is there and we still love them. This song goes out to our city."