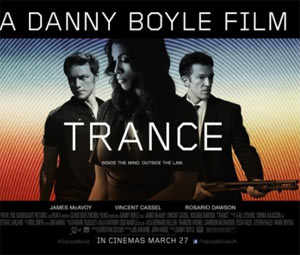 "After finishing the Opening Ceremony, I hardly knew what day of the week it was. I took a month off work, off music, off everything. Exactly one month and three days after we said goodbye in the stadium, I received a text from Danny (Boyle) that said, ". Do you ever want to hear from me again workwise and would that go as far as having a chat about Trance... Questions, questions." Two Minutes later I was on board."

Wednesday 27 February 2013:  Rick Smith of Underworld has written and recorded the original score for 'Trance', Danny Boyle's first film since 2010's 127 Hours, and also co-written a track, titled Here It Comes, with multi-Brit Award winner Emeli Sand'.  Smith worked with both Boyle and Sand' in his role as Musical Director of the London 2012 Olympic Opening Ceremony.  'Trance', the soundtrack album is released on 25 March by Universal and the film opens in the UK on 27 March.

At times mellifluous and gorgeously atmospheric and at others frenetic and claustrophobic, Smith's eleven original pieces have been written exclusively for the soundtrack and come sequenced alongside familiar tracks specifically chosen by Boyle and Smith for use in key moments in the film (including music by Moby, Unkle and M People).

Of work on the film score, Rick says: "For a film composer, working with Danny is a joy, because he's both a great collaborator and a giver of artistic freedom, he loves to be surprised, and also wants his film music loud and with presence, almost like another character  - for me this is creatively exciting and inspiring.  And it was a real joy to work with Emeli again - her passionate soulful voice and wonderful lyrics are a perfect ingredient of the score."

Danny Boyle said: "TRANCE reaches back to the darker more anarchic spirit of films like TRAINSPOTTING on which Rick was a key collaborator. The film is a puzzle of the protagonist's own making and Rick's music brilliantly drives the interior landscape of these characters as they try to solve it."

Emeli Sand' said: "It was wonderful to work with Rick again after the amazing time I had with him putting together the track for the Opening Ceremony at the Olympics. I was honoured to be asked to collaborate with him again for the film and, with his help, I believe we have created something very special."

Each of the tracks on Trance have been reworked and developed by Rick specifically for this soundtrack release in order to make the album flow as an immersive listening experience rather than a series of short film cues. The result is - like the film - hypnotic, disorientating and utterly mesmerizing.