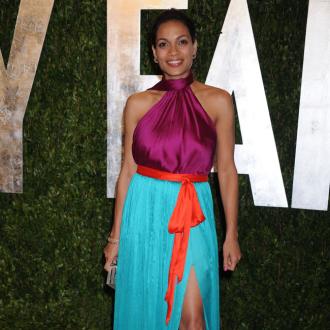 Danny Boyle and Rosario Dawson were ''very cosy'' at the world premiere of 'Trance'.

The director and actress - who were rumoured to have ended their romance earlier this month and reportedly avoided each other while promoting the upcoming heist thriller in Los Angeles over the weekend - appeared to be on good terms at the film's premiere in London's Leicester Square on Tuesday (19.03.13), laughing and joking with each other on the red carpet.

An onlooker told BANG Showbiz: ''Danny and Rosario didn't look awkward around each other, nor did they avoid each other on the red carpet. In fact, they looked very cosy at the premiere.

''They did a group photo with James [McAvoy] and Vincent [Cassel], and Danny had his arm around Rosario's back and they appeared to be sharing a chat, whispering in each other's ears and laughing in between photos. They seemed friendly with each other.''

It had previously been reported that the 33-year-old actress and Danny, 56, went out of their way to avoid each other at the film's LA junket last week.

A source said: ''Rosario and Danny didn't interact during interviews. It was pretty obvious they're no longer a couple. He was talking to a group of people when she arrived and it was awkward - like a cold greeting, no hug, and they got through it as quickly as possible.''