Dannii Minogue has admitted she found coming to the UK from Australia difficult because she was always negatively compared with her sister Kylie. 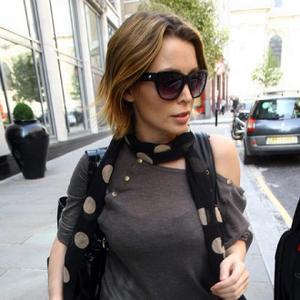 Dannii Minogue used to feel like she was merely Kylie's "fat ugly sister".

The Australian beauty first came to the UK when her younger sibling was at the height of her success in the late 1980s - scoring eight top three hits in the country's singles chart between 1988 and 1990 - and admits her experiences were damaging to her self esteem.

She said: "When I first came to England it was hard because it was Kyliemania. She was this cute little thing and I was the fat, ugly sister.

"Can you imagine for years being asked what it's like to be Kylie's sister?"

Although Dannii admitted she was made to feel "fat and ugly" she was still careful not to take any drastic measures after seeing one of her old friends almost die as a result of eating disorder anorexia nervosa.

She explained to Britain's Marie Claire magazine: "I'd been very good friends with this girl since primary school. I distinctly remember going into a hospital room and seeing her lying there, strapped to the bed.

"I was just a young teenager and it was so horrendous. I watched my friend nearly die from anorexia. There was no headline that someone could write about me that would make me do that myself."

Dannii Minogue: Shopping made me depressed

Dannii Minogue 'can't commit' to being a 'full time' musician