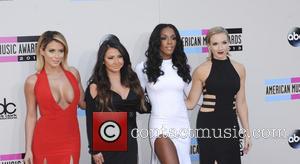 Danity Kane's pop comeback has been dealt a blow after singer Aundrea Fimbres announced she is leaving the group as she is pregnant and engaged to wed.

Fimbres reunited with Dawn Richard, Shannon Bex and Aubrey O'Day last summer (13) to plan a new assault on the charts, four years after they split, and they kicked off their No Filter tour in San Francisco, California on Friday night (16May14), hours after unveiling their new single, Lemonade.

However, fans of the Damaged hitmakers were in for a surprise during the show when Fimbres revealed she was stepping down from the line-up.

Growing emotional, the 30 year old told the crowd, "I do have to say one thing if you guys don't know. I just recently got engaged.

"Two dreams of mine have been to be a singer and be on stage like this and to have a family. In a couple of months, that's all about to come true. I'm going to get married...

"I've gotten to do some amazing things with Danity Kane, but it's time for me to start the next chapter in my life. So I thank you guys from the bottom of my heart... I love you so much. And I just wanted you guys to know from me."

Rumours of Fimbres' departure began swirling following the release of Lemonade on Friday, after fans noticed the cover art for the track only featured three young girls, appearing to depict O'Day, Richard and Bex, running a lemonade stand.

Danity Kane, which was formed by Sean 'Diddy' Combs on 2005 reality show Making the Band 3, will continue as a trio and is expected to release its first album in six years later this year (14).

Original member D. Woods is not part of the reunion.