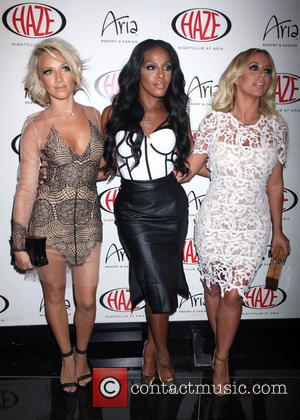 The members fell out following a recent recording session spat, during which singer Dawn Richard allegedly lashed out at Aubrey O'Day, and now the girls have confirmed the reunion is over.

O'Day released a lengthy statement with fellow bandmate Shannon Bex on Twitter.com on Friday (08Aug14), when she recalled the studio clash for fans - without naming names - and suggested that Richard had yet to apologise for her bad behaviour.

She writes, "It breaks my heart that this violence is followed by no sign of remorse. For the past year, I watched small lies turn into bigger lies. Those bigger lies turned into verbal abuse. Now the verbal abuse has deteriorated into a physical assault.

"I put what I knew was right second to what I knew I could handle for the sake of the big-picture success this incredibly talented group of women could have achieved together. It was my goal to prove that with enough understanding the issues behind the scenes could be resolved, and we could continue to create content for one of the most inspiring fan bases I have ever witnessed. I realize now that in order to achieve that reality all three girls would have to want that. And, unfortunately, only two of us put our solo ambitions and lives to a halt and consistently put the team first."

Bex adds, "My heart is heavy. It is all I can do to pull myself out of bed to face this task..."

Richard addressed the break-up in her own statement to Tmz.com, saying, "Sadness does not even remotely begin to describe what I feel right now."

The group reunited in May, 2013, and were putting the finishing touches to a comeback album when the fight occurred on Monday (04Aug14).

The reunion was filled with drama from the outset - original member D. Woods refused to be a part of the get together and Aundrea Fimbres quit the group on the opening night of a comeback tour in May (14), after revealing she was pregnant and engaged to wed.