Danielle Lloyd - who has an eight-month-old son Archie with fiance Jamie O'Hara - has revealed she is pregnant again. 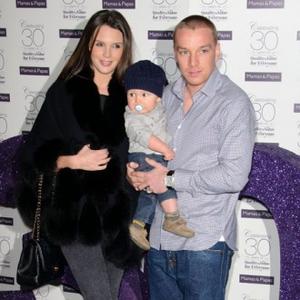 The 27-year-old beauty felt like the "most fertile person in the country" when she discovered she and soccer star fiance Jamie O'Hara - who already have an eight-month-old son Archie - were expecting another baby, just weeks after she had a contraceptive device removed.

She said: "I didn't plan on having another baby for at least five years. I had a coil fitted, but developed really bad pains only left side and doctors found a cyst the size of a tennis ball on my ovary, so it was removed immediately. I was pregnant within a month.

"I was shocked. If you have a cyst, it's very hard to conceive. I must be the most fertile person in the country."

Danielle - who is around four months pregnant - also revealed she was hospitalised recently but was relieved to discover all was well.

She told the new issue of OK! magazine: "I cry a lot as I'm so tired and my hormones are all over the place.

"I was rushed to hospital last week because I started bleeding. I thought I was having a miscarriage. I had a scan but I couldn't tell Jamie as he was playing a big game. I saw the nurse's face and thought that was it.

"She just said, 'Everything's fine' and at the same time, my phone beeped telling me Jamie had scored!"