Scroll for the new trailer and the film's poster

Daniel Radcliffe’s career has withstood two very distinct phases: being cast a child actor as Harry Potter and trying to shake off his reputation as a child actor in Harry Potter. It looks as though ‘Horns’ might be the picture to finally achieve that goal. In ‘Horns’, Radcliffe plays Ig, an ostensibly regular guy with a normal life, a girlfriend and all the rest of it. Until one day, his girlfriend is brutally murdered, and he wakes up hungover with horns growing out of his head. To boot: he is the number one suspect in the murder trial and the media are hounding him 24/7.

Radcliffe himself, at least from the trailer and some early reviews, delivers one of his best performances to date, accomplishing a stellar American accent which sometimes delves into a deep, burning drawl. The best moment of the trailer sees Ig pit two hungry reporters against each other in exchange for an exclusive interview.

“It’s a challenging part and there’s a lot to mine, in terms of what he has gone through, prior to the beginning of the film and as he’s going through it.  I broke down the script, the way that I would approach anything.  And then, you have the more superficial but fun challenges of the prosthetics, which is mainly a challenge of staying still, for me,” explained Radcliffe on his role in the movie to Collider recently.

Watch the trailer for 'Horns' here


Radcliffe also described the book upon which the film is based as “amazing,” adding: “I like things that take an idea that everyone can relate to, in some way, and not necessarily being accused of murdering your girlfriend, but the idea of being an outsider and experiencing loneliness and coping with loss, and finding a really original, crazy way to deal with that topic.” 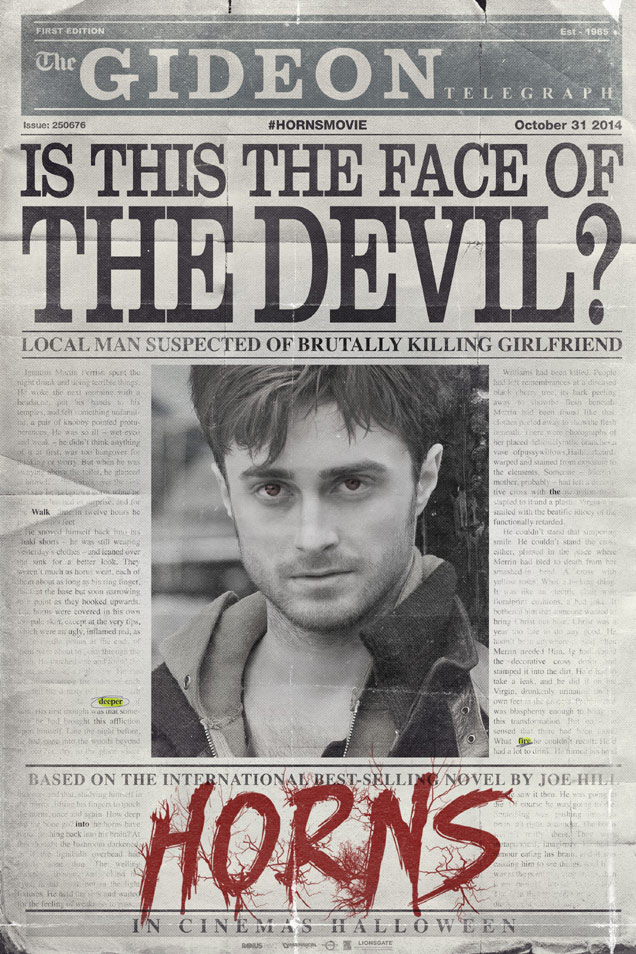