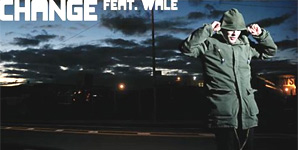 Daniel Merriweather seems to be popping up on the radar quite often these days; most notably due to the promotion of Mark Ronson who featured Merriweather on one of his singles 'Stop Me' and later signed him to his record label and production company Allido, not forgetting Daniel's recent contribution on Wiley's new album.

Now going solo he releases 'Change,' a very cool track in my opinion that features MC Wale spitting some apt rhymes. The production is slick and sophisticated, a style that Ronson seems to do so well. It has crisp snares, pimp piano chords and horns to create a jazzy feel. It creates a bohemian positive urban feel that oozes class and Merriweather's vocals are sweet, unique and soulful. Wale's contribution is a smart move and makes the whole track accessible and cool for kids. A winner for sure.
We also get a couple of remixes on this single 'The Count's Doin It' and 'Firstman' remix are great additions to this already purchasable single.