Review of Love And War Album by Daniel Merriweather 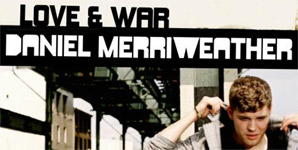 Aussie Daniel Merriweather created a bit of a stir after singing on Mark Ronson's Version album. He followed that lat year with his top ten hit single Change and then the radio friendly Red earlier this year. So there has been a definite buzz surrounding Love And War, his debut album.

Adding to the expectation is the fact that Ronson was called in to produce the record. It seems he hasn't lost his magic touch, as with his work on Amy Winehouse's Back To Black, Love And War is a brilliantly crafted piece of soulful pop. Merriweather's strong, smoky vocals are delivered with emotion and honesty and lyrically the songs are clever and compelling.

For Your Money and Impossible immediately make you sit up and listen, they are brilliant examples of modern soul. The album focuses, as you'd expect, on matters of the heart. Chainsaw sees Merriweather agonise over the pull of a destructive relationship, singing 'giving myself to you is like giving myself to a chainsaw, you keep cutting me open wide'.

A couple of tracks wander from the soul/Motown vibe and stray towards a softer folk-pop sound. Red, for example features Sean Lennon on guitar and produces a more mainstream sound, earning it some serious commercial radio airtime. Guest vocalists bring another dimension to the record. Change see's Wale injecting a bit of hip-hop and British soul star Adele takes the beautiful Water And Flame to another level.

Love And War is a competent, well produced debut. He may not match Amy Winehouse's inventive style or effortless class but Merriweather's vocals and heartfelt lyrics make it a compelling listen, this album will be a great summer record.