Daniel Craig And His Bond Co-star Lea Seydoux Took To The River Thames In London On Sunday (17may15) To Shoot A Dramatic High-speed Helicopter Chase For Upcoming 007 Movie Spectre. 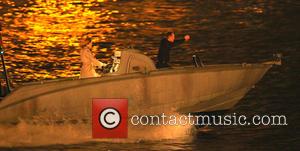 Picture: Daniel Craig and Léa Seydoux - Filming for some of the final scenes of James Bond 'Spectre' take place on the River Thames - London,...

The location shoot drew huge crowds to the banks of the river between Vauxhall and Westminster to watch as cameras filmed the actors in a speedboat in front of the iconic headquarters of MI5.

Several bridges in the U.K. capital, including Lambeth Bridge, were temporarily closed during filming, before Craig and Seydoux came ashore to watch their stunt doubles take part in the more daring part of the chase as the boat was pursued by a helicopter.

Spectre, the 24th movie in the superspy franchise, is due to hit cinemas later this year (15).