Daniel Craig and Rachel Weisz are splashing out $11.5 million on a three bedroom apartment in New York. 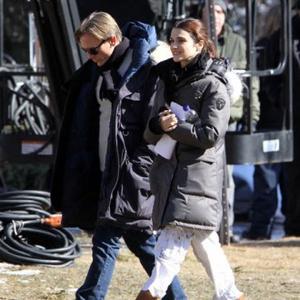 Daniel Craig and Rachel Weisz are splashing out $11.5 million on a new home.

The couple - who married in a surprise ceremony last June - are set to buy a three-bedroom, three-bathroom apartment in New York's SoHo district.

The 4,350 square foot property boasts an additional 2,000 square feet of outdoor space - including a private roof garden with its own kitchen - and facilities including a media room with a woodburning fireplace, the New York Post newspaper reports.

Meanwhile, city records show that Rachel has just sold her old house in the city - with the buyer being her former partner, director Darren Aronofsky.

The 'Wrestler' filmmaker - who has a five-year-old son, Henry, with Rachel - paid $2.52 million for the five-storey townhouse.

The sum is considerably less than the $3.4 million the former couple paid for the 11.5 room property in 2005 and the house is said to be worth an estimated 3-4 times more than what Darren has just paid.

Though it is unclear how many bedrooms the house has, it also boasts a terrace off three second-floor kitchen, a double parlour, and a garden.