Metta World Peace, who recently changed his name from Ron Artest, is the first contestant to be voted off 'Dancing With The Stars' this series. 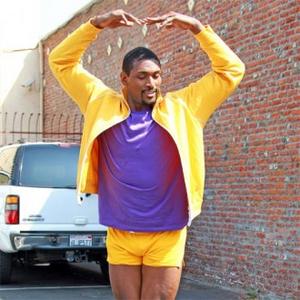 Metta World Peace has been given the boot from 'Dancing With The Stars'.

The basketball player - who recently changed his name from Ron Artest - became the first contestant of this series to be voted off the contest last night (20.09.11) along with his partner Peta Mergatroyd after the pair scored 14 points out of a possible 30 for their Cha Cha performance on Monday (19.09.11).

But panellist Carrie Anne Inaba was full of praise for his "sexy" dancing, although she admitted his technical ability was "kind of wrong".

She explained: "Now we know who the wild one is gonna be. You're sort of eccentric, and yet, kind of sexy. It works.

"Cha cha's a sexy dance, and I thought that worked, but it was kind of wrong for all the technical reasons."

After being voted off the show, Metta said: "I had a great, great time ... It was awesome.

"All I want to know is who's coming with me? Peta was great. Everybody give a round of applause for Peta, she was awesome!