Donald Driver: We Should Have Scored Triple Tens 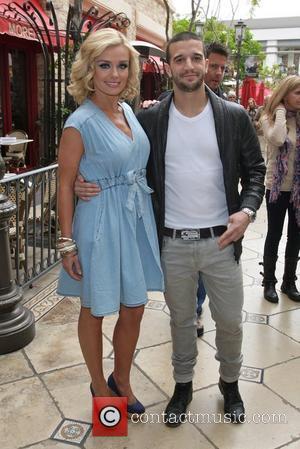 Picture: Singer and 'Dancing With The Stars' Contestant Katherine Jenkins and her Dance Partner Mark Ballas at The Grove to appear on the Entertainment News...

It was a frustrating night for Donald Driver on Monday night's Dancing With The Stars (May 7, 2012) with the former Green Bay Packers wide receiver scoring a total of 55 out of 60, which may not be enough come tonight's results show. Driver has had his eye on the Mirror Ball trophy in recent weeks, but he may not have done enough to make the semi-finals next week.
During Monday's show, Driver said, "This week is do or die.You either move to the semi- finals or you're going to see Jimmy Kimmel. And I ain't ready to see Jimmy". Two couples will be eliminated during Tuesday's results show, with both appearing on Kimmel's talk show later in the evening. On Monday, Driver received an initial score of 27 for his powerful tango to Stevie Wonder's 'Higher Ground', though it was the scoring for his second routine to 'Rip It Up' by Little Richard that frustrated the NFL star. The rousing jive was given full marks by Carrie Ann Inaba but two nine's from the other judges left Driver with just 28. The ballroom crowd erupted into boos, with host TOM BERGERON joking, "That got ugly for a bit". Driver himself was visibly upset with the score, saying, "That hurt.We thought it was triple 10's tonight".
Elsewhere in the scoring, William Levy scored 57 out of 60, Disney star Roshon Fegan scored 56, while Katherine Jenkins received 55.