Donald Driver topped the leaderboard on 'Dancing With The Stars' last night (09.04.12) with an impressive score of 27 for his paso doble with his partner Peta Murgatroyd. 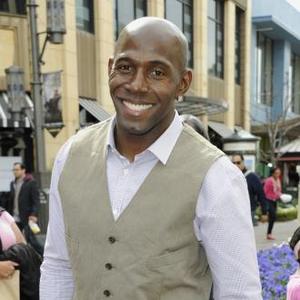 Donald Driver topped the leaderboard on 'Dancing With The Stars' last night (09.04.12).

The NFL star and his professional partner Peta Murgatroyd wowed the judges during rock week, with their paso doble to Jimi Hendrix's 'Purple Haze' - which saw the sportsman dance topless - earning a total of 27 points.

Carrie Ann Inaba described the routine as ''raunchy and spectacular,'' while Len Goodman teased: ''After the show, we'll compare tattoos.''

This week was the first time Katherine Jenkins and Mark Ballas have not topped the leaderboard, with the judges receiving boos from the audience - which included David Hasselhoff, Jennifer Love Hewitt and Rita Wilson - when they awarded the couple 24 points for their paso doble.

Len told them: ''It had promise but didn't quite deliver.''

Meanwhile, the show was not without drama as host Tom Bergeron announced Melissa Gilbert had injured herself during her performance - which saw her professional partner Maksim Chmerkovskiy slip and fall - and had to be taken to hospital following their routine which had scored 22 points.

And Melissa wasn't the only star to sustain an injury.

Maria Menounos complained of foot problems during rehearsals and medical tests showed she has sustained a stress fracture in her right foot and ''multiple bones'' in her left foot have also fractures.

However, she vowed: ''I'm going to keep pushing through.''

The TV star showed little sign of injury during her performance, with her and Derek Hough's tango earning them 26 points and joint second place on the leaderboard with Roshon Fegan and his partner Chelsie Hightower.

Soul singer Gladys Knight - who dubbed herself ''the grandma of rock and roll'' - took bottom place on the leader board with a score of just 20 points, one point behind Sherri Shepherd.

The contestants - which also include William Levy, Gavin Degraw and Jaleel White - will find out who is going home on the show tonight (10.04.12).