Dancing With The Stars Mark Ballas 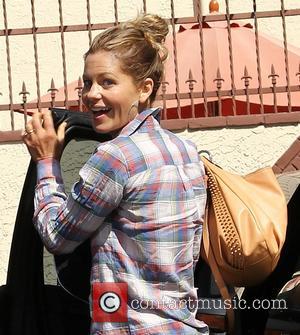 Actress Candace Cameron-Bure was forced to seek therapy with her Dancing With The Stars partner Mark Ballas after becoming overcome with anxiety while competing on the U.S. reality show.

The former Full House star reveals she began experiencing extreme stress and felt like she was "cracking under (the) pressure".

She tells U.S. breakfast show Good Morning America, "I just started getting in my head just thinking, 'I'm not as good as everyone else,' you start doubting yourself. My nervousness and anxiety had just kept building up each week and it was so bad..."

The nerves became so crippling, Cameron-Bure and her professional dance partner Ballas sat down with sports psychologist Dr. Jenn Berman to talk her through her insecurities.

However, on Monday (28Apr14), the 38 year old redeemed herself with an impressive performance of an Argentine Tango, which wowed the judges.

She says of the dance, "I was reminding myself, 'I can do this, I know the choreography.'"

Cameron-Bure wasn't the only competitor facing challenges on Monday's show - actress Danica MCKellar danced her way through the pain of a broken rib and U.S. paralympic snowboarder Amy Purdy was hospitalised after her performance due to a back injury.