Thumbs Up For Dan Steven's Broadway Debut In The Heiress 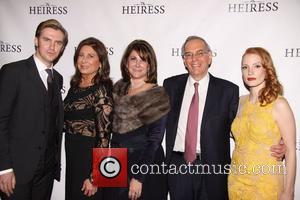 It seems there were plenty of Downton Abbey fans in the house when Dan Stevens debuted in The Heiress on Broadway, alongside Jessica Chastain. This was the first time that both Stevens and Chastain had appeared on Broadway. With both actors playing against type, only one appears to have done so convincingly.

The casting of Dan Stevens in the role of Morris Townsend is praised by the Hollywood Reporter’s reviewer David Rooney, who writes “the actor is a savvy casting choice in a part that requires beguiling charm and sufficient sincerity to keep us wondering about his character’s motives” and later adds “Stevens brings such unsullied earnestness to the role that we want to believe in his honest intentions, just as he appears to want the same. Morris is so bewitched by the material comforts of the Slopers’ swanky home on fashionable Washington Square that he seems as much a victim of his desires as the architect of any calculated scheme.”

Jessica Chastain, however, does not seem to have fared so well at the hands of the critics. The same review suggests that, despite her recent run of untouchable success in the world of film, the “underpowered Jessica Chastain (is) hampered by questionable directorial choices, dilutes the emotional impact of this nonetheless compelling melodrama.” Not such great news for Chastain, then, but an excellent Broadway debut for Dan Stevens, who has managed to impress the Downton fans, despite breaking from the confines of his nice-guy TV character.

Read the full review of The Heiress from The Hollywood Reporter