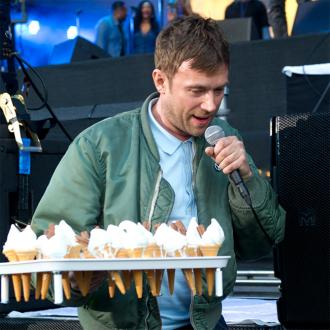 The 'Song 2' hitmaker's dished out the tasty treat to those lucky fans that had managed to secure a place on the coveted front row.

The band performed a 23-strong setlist complete with tracks from their latest album 'The Magic Whip' as well as their classic hits.

Near the end of the show, Damon paid tribute to guitarist Graham Coxon for being the driving force behind their new album.

He told the crowd: ''I just want to say thanks to Graham for getting The Magic Whip into shape ... And I want to thank the backing singers, the ice cream van, and you, the fans.''

With the band - which also includes bassist Alex James and drummer Dave Rowntree - making their third appearance at Hyde Park in six years, the crowds gave them a warm reception as they played some of their most well-known songs including 'Girls & Boys', 'Go Out' and 'Coffee & TV'.

And the band couldn't stop thanking their fans for all the home support.

He added: ''Thanks so much for coming back to see us again. It's great to be back in Hyde Park. It's like home - well, it is home really.

'There's No Other Way'

'Thought I Was a Spaceman'

'He Thought of Cars'

'End of a Century'

'Trouble in the Message Centre'