Blur have announced the release of their eighth studio album, entitled 'The Magic Whip' - the band's first in over a decade. 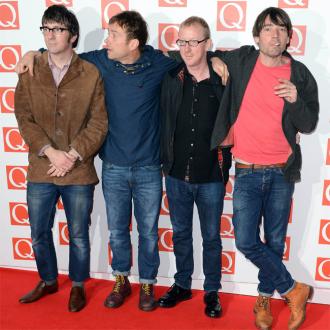 Blur have announced the release of their first album in 11 years.

The rock band - made up of vocalist Damon Albarn, guitarist and vocalist Graham Coxon, bassist Alex James and drummer Dave Rowntree - first started working on the record, entitled 'The Magic Whip', while they toured in Asia last year, but the group didn't decide for some time that it would become their eighth studio album.

Damon, 46, said: ''We had some downtime, we had a cancellation when we were in Hong Kong, so we thought we'd put five or six days to good use.

''We just went in there and knocked about loads of ideas.

''Nothing happened after that. And I said, 'I really don't think anything's going to happen.'''

Graham, 45, added: ''It was casual and just something we did off our own backs and I thought it would be great to let it ferment and go back and have a look.''

The news comes shortly after the 'Parklife' hitmakers' new album cover was released online. The sleeve shows a neon ice cream cone between Chinese lettering which reads 'Blur' and 'The Magic Whip'.

Damon said of the artwork: ''It's in simplified Chinese characters. On the left it says Blur and on the right it says 'The Magic Whip'.''

He added that the rockers are looking forward to playing tracks from the new album, which is out April 27, when they headline Hyde Park's British Summertime later this year.

The London-born singer said: ''On this occasion we will have a whole new set of things to get excited about so we'll have even more music.

''I love it [playing in Hyde Park] because I can cycle to work!''

'Thought I Was A Spaceman'

'There Are Too Many Of Us'