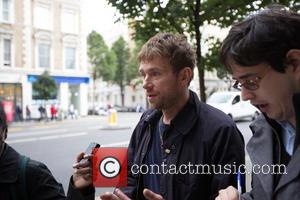 Picture: Damon Albarn - Greenpeace protests outside the Russian Embassy angry at the arrests of 30 activists including journalists that were accused of piracy by...

Damon Albarn's former chart rival Liam Gallagher has stepped in to rescue an Australian music festival after Blur pulled out and left the event without a headline act.

Albarn's Britpop band was due to perform at the Big Day Out touring festival next year (14), but they recently stunned organisers by announcing their withdrawal from the line-up via a Facebook.com message.

The move left bosses scrambling to find a replacement, and now it has emerged former Oasis frontman Gallagher will be taking over Blur's slot with his band Beady Eye.

Metal group Deftones and Sweden's The Hives have also been added to the bill.

A statement posted on the festival's website reads "We have replaced our departing Brit pop (sic) band with other members of English rock 'n' roll royalty Beady Eye, who are heading to Australia for the first time ever... Beady Eye have picked up where Oasis left off, traversing the globe and bringing their sing-a-long anthems Down Under for Big Day Out 2014... Any ticket holders unsatisfied with the alteration to the line-up can apply for immediate refund."

Other headline acts performing at the festival are Pearl Jam and Arcade Fire. Big Day Out kicks off in January (14).