Review of 9 Album by Damien Rice

After selling 2 million copies of his 2002 debut album Mr. Rice returns with that tricky second record. It's been 4 years in the making, has the wait been worth while? Damien's debut album "o" sold amazingly, primarily due to Rice's classic songwriting skills and the simple yet immense production provided by top movie composer David Arnold. 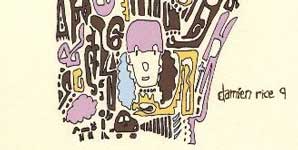 Taking from the greats and producing something modern yet classic sounding "o" gathered influences from the likes of Leonard Cohen, Van Morrison and Cat Stevens to create a coffee table classic of our times. An album that was accessible to all but still retained its razor sharp edge.

If you are expecting a new direction on the new album then you may be disappointed "9" is a fairly similar record, in mood and structure, to "o" but hey, if it ain''t broke..

"9" opens with the enchanting "9 Crimes" cooking up an emotional brew from the sparse ingredients of a simple piano arpeggio and the dueling vocals of Damian's right hand lady Lisa Hannigan. This track sets the tone of the album and rivals the best songs from "o".

"The animals were gone" and "elephant" are standard Rice creations - mixing the power of Radiohead's "Creep" with the classic songwriting of Frank Sinatra's "My Way". "Rootless Tree", "Coconut Skins" and "Grey Room" keep the first albums Astral Weeks influence flowing, while "Dogs and Me, My Yoke and I" reach new levels of screeching heaviness.

The one thing this album lacks is a track like "Cannonball". The stripped down album version of "Cannonball" off of "o" was given some drum loop treatment that turned the track into a radio play-list friendly groovy shuffle. The track charted well and dominated the airwaves for some time, which in turn brought in the album buyers.

Lyrically "9" seems to have more bite. This is displayed well on the aforementioned "Dogs and Me, My Yoke and I" and especially in "Accidental Babies" which is lyrically acidic to say the least. The vocals scale from the quietist whisper to all out raging hell and then back down again. This emotional rage is the main sonic difference between "9" and the first album. I believe most of the recording took place in make shift studios erected in homes; maybe this homely recording is what led to the extra intensity. Also four years touring the world, on and off, may be partly accountable for the evident intensity. Said intensity will suit some listeners but not all.

Overall "9" is an album written from the heart and for those of you that loved "o" this album is in enough of a similar vein to not leave you disappointed. Damien is doing things in his own way and all power to him for having the balls to not try to cash in on the incredible interest in his first record.

Watch the video for 9 Lives here