Review of It's A Corporate World Album by Dale Earnhardt Jr. Jr.

Dale Earnhardt is one of the most recognisable names in NASCAR, winning 76 races throughout his career as a driver. During the 2001 Daytona 500 (the NASCAR equivalent to racing at Silverstone), the famed driving was involved in a crash on the last lap of the race, dying of a basilar skull fracture almost immediately after. His son, Dale Earnhardt Jr, is also a NASCAR driver and one of the most popular and illustrious stars of the sport at the time being. 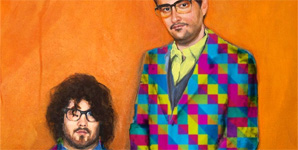 Dale Earnhardt Jr. Jr. have nothing to do with driving. They are a Detroit-based two-piece who do not write songs about driving or for driving along too, neither of the pair have family connections to the sport and their music is unlikely to get used on a car advert anytime soon. Unless you are a keen racing enthusiast, this should not be a problem because what Dale Earnhardt Jr. Jr. do, and do well, is make thoroughly listenable, electro-tinged indie-pop that according to ESPN Magazine, even Dale Earnhardt Jr. is a fan of.

Joshua Epstein and Daniel Zott make up the group and after only two years together, It's A Corporate World indicates that they are just that - a still young band who are yet to properly find their feet. For the majority of the album they do look to have found their own sound, mixing elements of keyboard tapping indie with some well-layered harmonies, but on the last two tracks the band start to come out of their shell and take on a much more interesting approach. On the standout Gil Scott Heron cover 'We Almost Lost Detroit,' the band incorporate organs and a much more assured vocal performance that oozes hometown glory. The rest of the album is good, but if it were delivered in a less conventional style like what they exhibit on 'We Almost Lost Detroit' then it could add an edge that would only benefit the album. On the closer 'The Fisherman,' the band use a much more acoustically infused sound and even sound a little Grizzly Bear at time. They lack that final bit of quality that Grizzly Bear have in abundance, the song eventually sounding muddled and as though they've tried too hard and not got a lot of end product in the end.

After listening to these two late tracks you can't help but feel that the rest of the album gets by on a chipper melody and harmonies that now sound a little half arsed. It has a host of positives, 'Nothing But Our Love' and 'Vocal Chords' are two of the chirpiest and pleasantest songs to come out of Detroit for some time. But overall this is an album that lacks any really consistency and worse of all is that once you think you've heard all you can from the electro-popsters, they drop the last two tracks that leave you wanting more when there's no more of this style to go round. 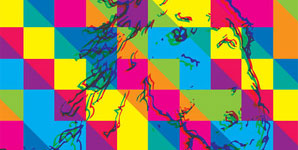 Dale Earnhardt Jr. Jr. - Nothing But Our Love